The San Antonio Breast Cancer symposium is an annual summit on breast cancer research. Researchers and clinicians have been meeting here every year since 1977. It has been certified by the AACR, l’American Association for Cancer Research, the world’s leading cancer research center, since 2007. Institut Curie never fails to shine here, and is very often given a platform at one of the twenty-odd plenary sessions reserved for leading medical and scientific projects.

This will be Prof. François-Clément Bidard’s third plenary session presentation in five years. His last presentation was given two years ago and examined the results of an international trial that demonstrated that the quantity of circulating tumor cells (CTC) in a patient’s bloodstream corroborated with prognosis, with a high CTC rate being synonymous with the extent to which the cancer has spread, with ultimately potentially fatal consequences. CTCs are cancerous cells that stem from an initial tumor, spreading through the blood from the original site and therefore demonstrating the cancer’s ability to spread to other organs.

What remains to be seen is whether these findings might be useful in providing care and stopping the disease.

Prof. François-Clément Bidard and Prof. Jean-Yves Pierga, head of Institut Curie’s medical oncology divison will be discussing this topic alongside the results of a new phase-III clinical trial carried out with the help of 778 patients in around fifteen different French hospitals and several testing laboratories. All these patients were suffering from hormone therapy-reactive RO+ HER2- breast cancer, which accounts for approximately 70% of all female patients.

Once metastases have emerged, these cancers become very difficult to treat. For more than 20 years now, medical consensus recommends prescribing hormonal treatment (with limited side effects), rather than chemotherapy, which is restricted to patients with forms of cancer deemed more severe. However, criteria can be used by doctors to assess severity level and the choice of treatment therefore remains flexible.

For this clinical trial backed by France’s national cancer institute, the patients were split into two groups. For half of them, the choice of treatment (hormone therapy or chemotherapy) was determined by the doctor, based on each patient’s apparent health. For the other half, treatment choice was made based on CTC assay: women with a high CTC rate were given chemotherapy, while the others were advised hormone therapy.

The results showed that in most cases, CTC assay corroborated the choices made by doctors, and therefore had no impact on patient care. But researchers examined the 300 or so patients whose assessment didn’t match up, where CTC assay resulted in a different treatment choice than the one prescribed by a doctor. They noticed that women who were prescribed hormone therapy by their doctors but who had ultimately been given chemotherapy as a result of their high CTC rates saw their chances of survival rise.

“These results are a rarity,” says Prof. Bidard, “and are a welcome reward for the many patients and doctors who took part in the trial. This encourages us to take two different approaches in prescribing care: clinical observation and CTC assay”.

All women suffering from these forms of cancer therefore deserve access to this CTC testing technology from CellSearch®. “This is relatively simple testing, available in many different centers around France. It is inexpensive (around €500) when compared to the many benefits it can potentially bring patients. We hope that these findings will result in it being offered on prescription, in the specific conditions outlined in the trial,” concludes François-Clément Bidard. 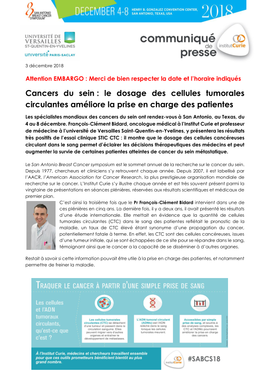