The San Antonio Breast Cancer symposium is an annual summit on breast cancer research. It has been certified by the AACR, l’American Association for Cancer Research, the world’s leading cancer research center, since 2007.

Every year, Institut Curie is an active participant at the symposium. This time, in addition to Prof. Bidard’s talk on circulating tumor cells, 30 posters are to be displayed, including three illustrating particularly interesting findings.

Dr. Anne Vincent-Salomon, head of Institut Curie’s diagnostic and theranostic medicine division created two of the posters on tumor-infiltrating lymphocytes. These immune cells are found in some types of cancer and are generally signs of a good prognosis. There has been renewed interest in these cells since the emergence of immunotherapy, treatments that draw on patients’ immune defenses to fight off the tumors.

Yet a pioneering study has recently shown that, unlike in most other cases, tumor-infiltrating lymphocytes in patients with lobular breast cancer, the second leading histologic type of breast cancer, are linked to a poor prognosis.

Anne Vincent-Salomon wanted to verify the results of these astonishing findings. She worked with her team on over 450 samples of infiltrating lobular cancers taken from patients who were treated a dozen years ago at Institut Curie to check for these tumor-infiltrating lymphocytes.

The results showed that the presence of these cells is indeed linked to larger tumors, a higher relapse rate and curtailed survival rates compared to patients who do not present these lymphocytes.

This confirmation could impact on how patients suffering from this type of cancer are treated in the future. Researchers will now be carrying out molecular analysis (DNA, proteins, etc.) on these tumors to pinpoint the best treatment to offer.

In her second poster, Anne Vincent-Salomon illustrates the effects of targeted therapy known as palbociclib on these tumor-infiltrating lymphocytes, in cases of luminal B tumors, which are particularly difficult to treat. In a multicenter trial, NEOPAL, coordinated by Dr. Paul Cottu, a medical oncologist at Institut Curie, and backed by Unicancer, palbociclib had already been confirmed as a way of stopping tumoral cells from spreading with spectacular results, albeit without destroying the cells in question.

Anne Vincent-Salomon observed that this drug also increased the number of tumor-infiltrating lymphocytes. Based on these results, doctors and researchers are developing a new care strategy: treating patients with palbociclib to block tumors and boost lymphocyte numbers, and following up with immunotherapy. Researchers are currently planning a clinical trial to test out this strategy.

It should be noted that checking for these tumor-infiltrating lymphocytes in patients is a very easy task carried out by a pathologist who uses a microscope to examine tumoral samples taken via biopsy or during surgery. This means the strategy adds no extra cost or time to patient care.

Another poster takes a closer look at women’s fertility following breast cancer. Chemotherapy can sometimes have harmful effects on young women’s ovaries. Preservation treatment (collecting and freezing eggs) can be offered prior to chemotherapy as a way of helping them to become parents once they have recovered.

Dr. Anne-Sophie Hamy-Petit, a gynecologist at Institut Curie working as part of the team led by Prof. Fabien Reyal, head of the gynecological surgery, breast oncology and reconstruction division at Institut Curie, wanted to find out whether setting up these processes delays patient care and impacts on prognosis.

She examined the medical records of nearly 1,400 young women who received treatment at Institut Curie over the past few years, and her findings were reassuring: these fertility preservation treatments have no impact on patient care times.

Following their illness, many of these patients were able to conceive naturally, while others received reproductive assistance.

Clinicians can therefore continue to help their patients fight their illness without worrying about their future prospects for motherhood.

Researchers are nevertheless remaining vigilant and are waiting to have more perspective on whether the patients in question may relapse. 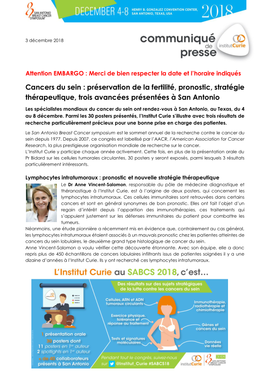