Radiotherapy is one of the key treatments for cancer. It uses the properties of ionizing radiation to destroy cancerous…

Nanoparticles and Radiotherapy: A Winning Combination in the Fight Against Cancer 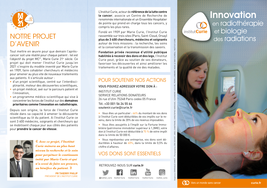 Developing the Radiotherapy of the Future

Julia Vollerin
Share
Institut Curie witnessed the birth of radiotherapy, and innovation in the field is one of its key priorities. The institute fosters connections between research and clinical practice in order to develop better therapies for cancer patients.

Institut Curie: The Birthplace of Radiotherapy

Invented over a century ago, radiotherapy was developed from the discoveries of Marie Curie, who was convinced that ionizing radiation could be the perfect weapon in the fight against cancer. Since then, radiotherapy has seen continual improvements through technological progress. With the development of medical imaging and information technology, as well as the machines used to deliver radiotherapy, it has become increasingly precise. This progress can be seen in the increasing use of advanced techniques such as stereotactic radiotherapy (modern imaging technology means tumors can be viewed in three dimensions and targeted very precisely), respiratory-gated radiotherapy (“fourth dimension” radiotherapy that can irradiate a tumor in a moving lung, for example, while protecting the healthy tissue), and proton therapy (a more precise form of radiotherapy that uses small particles known as “protons”).

Today, radiotherapy is one of the main components of cancer treatment. Approximately 50% of cancer patients in France are treated with radiotherapy at some point during the course of their illness. Research in radiotherapy is more important than ever before. If radiotherapy is to be improved, researchers must overcome two major hurdles: the resistance of certain tumors to treatment and the long-term side effects that limit its use. Due to the risk of side effects, it can be difficult to increase the dose in order to make the radiotherapy more effective: “This can only happen if we can be even more precise, and identify the tumors to which it can be applied,” explains Prof. Philip Poortmans, Head of the Department of Oncological Radiotherapy at Institut Curie. “By gaining a better understanding of the biological mechanisms of radiotherapy itself and the mechanisms of tumor resistance, we can also develop new approaches that reduce its side effects.” To enable more patients to benefit from radiotherapy, physicians and researchers at Institut Curie join forces to innovate and develop new approaches.