In order to proliferate, take shape within a tissue or manage the constraints of the tissue, cells are able to measure certain physical parameters in their environment. On October 16, 2020, two teams from Institut Curie and the CNRS published two articles in Science, highlighting two physical-biological mechanisms by which cells sense their size to adapt their proliferating and migratory dynamics. These important results will help understanding the deregulations associated with the formation of tumors.

The cells achieve incredible challenges: they change shape, they divide and adapt to their environment, under the control of mechanical forces, among other things. Until now, the physical-biological phenomena allowing cells to measure their size and shape in order to grow and multiply during development, or control the density of the tissues, were unknown. Today, two teams from Institut Curie and the CNRS shed light on the mechanisms involved.

Cellular “rulers” to measure their size

Recent works have shown that the proliferation and morphogenesis of tissues are controlled by mechanical forces: cells are able to “feel” these forces and adapt their behavior. Today, the team of Yohanns Bellaïche, CNRS researcher in the Genetics and Developmental Biology unit (Institut Curie, CNRS, Inserm, Sorbonne University) goes even further through multi-disciplinary studies. The researchers discovered that in response to morphogenetic forces, the cells extend and proliferate by forming stress fibers. Made up of actomyosin, these contractile micromotors cover the cell at the adherens junctions (cell-cell attachments found in most tissues). Physical modeling and experimental data have shown that the number of stress fibers increases with the cell size. Furthermore, the quantity of fibers depends on the position and number of tricellular junctions[1] in the cell. These tricellular junctions thus act as a sort of internal “ruler” that helps the cell ascertain its size and adapt its behavior.

“The discovery of this mechanism reveals a the first scaling law between the cell’s size and its mechanical properties, which is vital for limiting the elongation of large cells in relation to small cells, and ultimately, for controlling the shape of the adult tissues. A larger cell should increase its resistance to external forces and then divide to become like its neighbors,” explains Yohanns Bellaïche. “We have much yet to learn about the interactions involved in these processes. Indeed, we known that the stress fibers act by activating a signaling pathway known as Hippo-YAP, which is central in cancer.”

The cell nucleus “gages” its state of compression

The team of Matthieu Piel, CNRS researcher in the Cell Biology and Cancer unit (Institut Curie, CNRS, Sorbonne University), based at the Pierre-Gilles de Gennes Institute for Microfluidics, is seeking to find out how certain cells (immune cells or cancer cells) are able to adapt their behavior when they are confined in a dense environment.

In the journal Science, researchers from Institut Curie and CNRS, in collaboration with the team of Daniel Müller, at the ETH in Basel, Switzerland, and Alexis Lomakin, a researcher from the Children’s Cancer Research Institute in Vienna, Austria, demonstrated that the cell nucleus is able to detect the degree of compression imposed by the environment. This result is corroborated by a study published in the same issue of Science by researchers from the Centre for Genomic Regulation (CRG) in Barcelona. Traditionally considered as a passive “warehouse” for genetic material, the nucleus turns out to be an active compartment, able to quickly convert mechanical stimulations into biochemical signals. Indeed, the nucleus deforms with the cell, its rigid envelop stretches due to the force of deformation. This tension triggers the action of enzymes that allow the cells to adapt their mechanical state and their behavior. “The enzymes involved will produce signals. They will trigger a contraction in the cells that can be seen as a sort of escape reflex, just like when we hug a pet too tightly, and thus allow it to protect its nucleus by escaping confinement,” explains Mathieu Piel, CNRS researcher. These signals can also be felt by neighboring cells and can cause collective effects.

This mechanism fulfils an essential role to ensure that the cells, like immune cells, can adapt, survive and move efficiently in an over-populated and mechanically diverse environment such as that of tumors.

Matthieu Piel concludes: “Our results show that the cells are surprisingly resistant to compression forces; they monitor their own shape and develop an active contractile response when they are too deformed. Today the challenge we face is to be able to characterize the complete spectrum of signals triggered by the deformation of the cell nucleus, and understand the signaling pathways at play, the epigenetic and metabolic adaptations involved... all vital leads for our future research!”

[1] These tricellular junctions are located where three cells meet, and their number varies according to the size of the cells. The larger the cells, the higher the number of junctions. 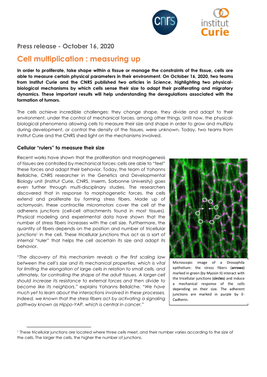