Institut Curie applauds the €75 million fundraising achieved by its spin-off Mnemo Therapeutics co-founded with Memorial Sloan Kettering Cancer Center. Obtained from European and American investors, this is the largest round of funding ever raised in France by a biotech company, only two years after its creation. Resulting from many years of research conducted at Institut Curie, these innovations bodes promising prospects in the fight against cancer.

Founded in January 2019, Mnemo Therapeutics is a biotech company dedicated to next-generation cell therapies whose original technology aims to identify new antigenic cancer targets to create immuno-oncology treatments. The start-up was born from the laboratory of Sebastian Amigorena, CNRS research director and head of the Immune Responses To Cancer Team (Institut Curie, Inserm) in collaboration with several research teams at Institut Curie. The project then gained in ambition with the work of the laboratory of Dr. Michel Sadelain, head of the Cellular Engineering Center at Memorial Sloan Kettering Cancer Center and co-founder of the company. The company announced today that it has raised €75 million in Series A funding, as rejoices Sebastian Amigorena, scientific co-founder of Mnemo Therapeutics: “It took more than ten years to develop this revolutionary strategy, and before that, years of fundamental research to understand the functioning of the immune system and epigenetics, two key research areas at Institut Curie. Mnemo Therapeutics was born out of this work. We are delighted with this new step, which brings us one step closer to innovative therapeutic solutions.”

It was in 2016 that Institut Curie teams succeeded in identifying a new technique with promising prospects: the combination of immuno-epigenetics and CAR-T therapies. CAR-T therapies are a new form of immunotherapy based on the genetic modification of a patient's own T cells. Once modified, these T lymphocytes called CAR-T cells are reinjected into the patient so that they are able to recognize and destroy their cancer cells. In this case, epigenetics allows the "re-programming" of these CAR-T cells (by blocking the expression of an enzyme, thus reducing the cells' survival and renewal capacities), thus increasing their effectiveness in rejecting the tumor. This unique approach to the fight against hard-to-treat tumors has been strengthened by a collaboration with the world leader in cancer research, Memorial Sloan Kettering Cancer Center.

“This impressive fundraising highlights the scientific excellence of Institut Curie's teams and perfectly illustrates our model: cutting-edge fundamental research and innovation for the benefit of patients. This is also an acknowledgement of the work carried out by Institut Curie's legal and technology transfer teams, supported by the Carnot program,” explains Professor Alain Puisieux, head of Institut Curie’s Research Center.

Since 2016, Mnemo Therapeutics has benefited from Institut Curie's incubation program, with support from the scientific founders during the various stages leading to the creation of the company.

“The steps were taken in an extremely short time, starting with the protection of the key innovation by a first patent in 2016, completed by several others since then. Priority was then given to structuring the company by the identification of a CEO, Alain Maiore, and exchanges with the first investment fund that financed the seed, Sofinnova. In less than 4 months at the end of 2018, we negotiated and signed the license agreements and the first partnership agreements, an illustration of the progress made in France in terms of technology transfer,” recalls Amaury Martin, head of Institut Curie’s Technology Transfer Office and head of Carnot Curie Cancer. "The addition of Memorial Sloane Kettering Cancer Center to our capital, which brings a portfolio of strategic patents and unique experience in the field of CAR-T, as well as this round of financing, are very satisfying and give us hope for the future," concludes Amaury Martin.

With this financing, the company will accelerate the development of its novel platform for tumor target identification, engineering and generation of CAR-T cells for therapeutic purposes. Mnemo Therapeutics aims to be at the forefront of the field over the next five years so that this approach can benefit all patients as soon as possible. 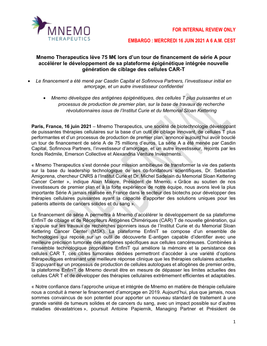 Treating cancer by using our own defense structure: the immune system. This concept is known as immunotherapy. Long the…