A century after her triumphant tour across the Atlantic, Institut Curie delves back into the story of a donation that forever changed the course of scientific history and had a lasting impact on Marie Curie’s research. Institut Curie is also seizing the centenary celebrations as an opportunity to announce plans to establish France’s first Chemical Biology  center.

A gram of radium gifted by the women of America

In an exceptional interview conducted in 1920, American journalist Marie Mattingly Meloney asked Marie Curie “If you had the whole world to choose from, what would you take?”. The latter responded: “I would wish for a gram of radium to facilitate my research”. This radioactive chemical element she discovered with Pierre Curie in 1898 contains therapeutic benefits essential to fighting cancer. Marie Mattingly Meloney was a feminist icon at a time when women had just been granted the right to vote. Fascinated by the scientist, she set up a fundraiser to raise $100,000 from American women to allow Marie Curie to buy her gram of radium.

As part of the fundraising campaign, Marie Meloney invited Marie Curie on an honorary trip to the United States. After a week-long crossing, the scientist arrived at New York on May 11 1921, and embarked on a triumphant adventure that would take close to six and a half weeks. During her time in America, Marie Curie visited the country’s most famous universities, such as Harvard, Yale, and Columbia, giving conferences, accepting honorary doctorates, and touring research laboratories. On May 20, 1921, Marie Curie was invited to the White House, where American President Warren Harding gifted her a gram of radium. The Fondation Curie was set up at the same time.

At the cutting edge of innovation: France’s very first Chemical Biology center to be set up at Institut Curie

Institut Curie, France’s leading cancer center, combines an internationally-renowned research center with a cutting-edge hospital group, treating all types of cancer, including the rarest. Founded in 1909 by Marie Curie, Institut Curie’s three sites (Paris, Saint-Cloud and Orsay) are home to over 3,700 researchers, doctors, and healthcare professionals working on its three missions: treatment, research and teaching. As a foundation that has enjoyed public utility status since 1921, Institut Curie is authorized to accept donations and bequests, and thanks to the support of its donors, is able to accelerate discoveries and improve patient treatment and quality of life. Find out more at curie.fr 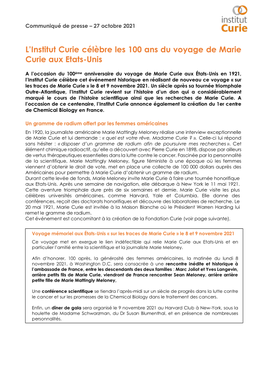