For the first time, scientists from CNRS, Institut Curie and Sorbonne Université have been able to act physically on chromosomes in living cells. By subjecting the chromosomes to different forces using magnets, they discovered that chromosomes are in fact very fluid – almost liquid – outside cell division phases. This study is published in Science on July 29, 2022.

Chromosomes are fluid – almost liquid – outside their division phases.  This discovery was made possible thanks to the direct mechanical manipulation, for the very first time, of chromosomes in the nucleus of living cells.

Until then, chromosomes – which are very long DNA molecules – were represented as being entangled like loose balls of yarn, and forming a sort of gel. The observations reported in this new publication offer a very different image. Fluid and able to move freely, chromosomes are not restricted by other elements that make up the nucleus, and are able to reorganise themselves.

To reach these conclusions published in Science, scientists from CNRS, Institut Curie and Sorbonne Université, working in the Nuclear Dynamics, Physical Chemistry and Cell Biology and Cancer1 laboratories, in collaboration with scientists from MIT, attached magnetic nanoparticles to a small portion of a chromosome in a living cell. Then, they stretched the chromosome, exerting different degrees of force, thanks to a micro-magnet outside the cell. Using this approach, the teams managed to measure the response of a chromosome to external forces, for the very first time in a living cell.

Through these experiments, the scientists were able to see that the range of forces exerted naturally in the nucleus – for example by enzymes replicating DNA – is sufficient to substantially alter the conformation of a chromosome. This major discovery, at the interface between physics and biology, changes the hitherto established representation of chromosomes. It also adds new elements to our understanding of biological processes, the biophysics of chromosomes and the organisation of the genome.

1.  These three laboratories are part of CNRS, Institut Curie and Sorbonne Université. The study was carried out by three research teams in France, including that led by Maxime Dahan, who died in 2018; he played a crucial role in initiating this project. 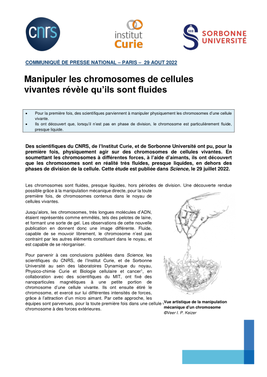