High Grade Gliomas, representing about 20% of all pediatric central nervous system (CNS) tumors, still have a dismal outcome with a 5-year survival of less than 20%. Their standard treatment consists of surgical excision, in those locations where it is feasible, followed by radiotherapy (RT). In the absence of feasibility of surgical removal, a surgical biopsy is carried out to enable diagnosis. Radiotherapy is then performed alone or in association with chemotherapy and/or other medical treatments.

“This collaboration represents another clinical milestone for Onxeo and reflects the Company's commitment to evaluate its drug candidate in indications with very high medical need, which is the case for this indication with a poor prognosis. The aim is to evaluate the synergy of the combination of AsiDNA™ with radiotherapy in order to improve treatment outcomes for these children suffering from relapsing High-Grade Glioma,” said Olivier de Beaumont, Chief Medical Officer of Onxeo. “We are excited and honored to be collaborating with the teams at Institut Curie, a world-renowned academic institution that we would like to thank, as well as the teams of Fight Kids Cancer for their support in this research aimed at improving the care of these children.”

"We look forward to start this original proof-of-concept study of the systemic administration of AsiDNA™ in combination with radiotherapy in this disease with a poor prognosis: the development of new treatments meets a major need. This first study is supported by a grant from the European Fight Kids Cancer program, which we thank for their support, and is being conducted within the framework of the European ITCC2 consortium. High-grade gliomas in children are a particularly severe disease and the treatments available are limited in terms of their efficacy but also in terms of their potential toxicity on the brain. Combined with radiotherapy, AsiDNA™ could represent a real therapeutic breakthrough, bringing together greater efficacy with a very reassuring tolerance profile”, said François Doz, MD, PhD, pediatrician oncologist, deputy director of clinical research, innovation and teaching at the SIREDO (Care, Innovation, Research, in oncology of children, adolescents and young adults) of Institut Curie and principal investigator of the study. He concludes: "We are delighted with this clinical development in pediatric oncology of AsiDNA™, an innovative therapy resulting from the work of Marie Dutreix's research laboratory at Institut Curie. If this study is positive, it could pave the way for further studies in association with radiotherapy, in children with brain tumors".

Surgery, when possible, and radiotherapy, sometimes combined with chemotherapy, often allow control of the disease in high-grade gliomas in children, but this control is inconsistent and most usually transient because the tumors evolve secondarily due to the development of resistant tumor cells. In preclinical and clinical studies3, the synergistic effect of AsiDNA™ in combination with "DNA breakers" such as radiotherapy has been demonstrated. Institut Curie and Onxeo collaborated on this multi-center phase 1b/2 trial design. Institut Curie, as study sponsor, will submit the application for authorization of this trial to the health authorities and ethics committees in the coming weeks, with the aim of initiating the study as early as 2021.

1. Fight Kids Cancer is a European call for projects, a joint initiative of the French association Imagine for Margo, the Belgian KickCancer Foundation and the Luxembourg Kriibskrank Kanner Foundation.
2. Innovative Therapies for Children with Cancer (ITCC) Consortium : www.itcc-consortium.org
3. First-in-human phase I study of the DNA repair inhibitor DT01 in combination with radiotherapy in patients with skin metastases from melanoma. Le Tourneau C et al. Br J Cancer. 2016 May 24;114(11):1199-205

About Institut Curie
Institut Curie, French leading center for the fight against cancer, combines an internationally renowned research center and a state-of-the-art hospital group that treat all types of cancer, including the rarest. Founded in 1909 by Marie Curie, Institut Curie brings together more than 3,600 researchers, doctors and healthcare professionals around its three missions: care, research and teaching.
As a private foundation recognized for public utility and authorized to receive donations and bequests, Institut Curie can, thanks to the support of its donors, accelerate the discoveries and thus improve the treatment and the quality of life of the patients.
For more information, visit institut-curie.org

About Onxeo
Onxeo (Euronext Paris, NASDAQ Copenhagen: ONXEO) is a clinical-stage biotechnology company developing innovative oncology drugs targeting tumor DNA-binding functions through unique mechanisms of action in the sought-after field of DNA Damage Response (DDR). The Company is focused on bringing early-stage first-in-class or disruptive compounds from translational research to clinical proof-of-concept, a value-creating inflection point appealing to potential partners.
platON™ is Onxeo’s proprietary chemistry platform of oligonucleotides acting as decoy agonists, which generates new innovative compounds and broaden the Company’s product pipeline.
AsiDNA™, the first compound from platON™, is a first-in-class, highly differentiated DNA Damage Response (DDR) inhibitor based on a decoy and agonist mechanism acting upstream of multiple DDR pathways. Translational research has highlighted the distinctive properties of AsiDNA™, notably its ability to abrogate tumor resistance to PARP inhibitors regardless of the genetic mutation status. AsiDNA™ has also shown a strong synergy with other tumor DNA-damaging agents such as chemotherapy and PARP inhibitors. The DRIIV-1 (DNA Repair Inhibitor-administered IntraVenously) phase I study has evaluated AsiDNA™ by systemic administration (IV) in advanced solid tumors and confirmed the active doses as well as a favorable human safety profile. The ongoing DRIIV-1b extension study is evaluating the safety and efficacy of AsiDNA™ at a dose of 600 mg in combination with the reference chemotherapy, carboplatin -/+ paclitaxel, in advanced metastatic tumors. Preliminary results from both cohorts showed good tolerability, stabilization of the disease and an increase in treatment duration compared to previous treatments. The ongoing REVOCAN phase 1b/2 study evaluates the effect of AsiDNA™ on the acquired resistance to PARP inhibitor niraparib in relapsed ovarian cancer.
OX401 is a new drug candidate from platON™, optimized to be a next-generation PARP inhibitor acting on both the DNA Damage Response and the activation of immune response, without inducing resistance. OX401 is undergoing preclinical proof-of-concept studies, alone and in combination with immunotherapies.
For further information, please visit www.onxeo.com. 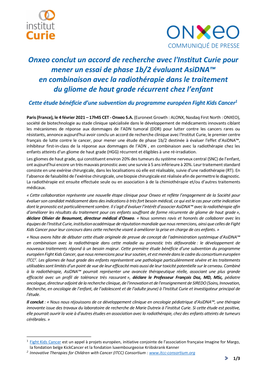