The main purpose of the Supervisory Board is to control the management bodies and ensure the proper management of the Executive Board. It is assisted by 3 ad hoc committees.

• Henri-Michel Comet, representing the French Ministry of the Interior

Representatives of scientific and medical staf

• Fatima Mechta-Grigoriou for the Research Center

Six other members with voting rights

The Supervisory Board is assisted by three ad hoc committees

The Audit and Finance Committee

This committee is in charge of helping the Supervisory Board and facilitating its decision-making in the following areas: monitoring financial strategy; accounts and financial information; annual budget and budget monitoring; investment projects; internal control and risk prevention.

The Executive Board is tasked with the administration and management of Institut Curie in conjunction with the directors of the Hospital Group, the Research Center and the Head Office. It is vested with wide-ranging powers to take action in all circumstances on behalf of the foundation. Members of the Executive Board are appointed for a renewable period of 6 years.

Chairman of the Executive Board: Prof. Thierry PHILIP

The Scientific Advisory Board

The Scientific Advisory Board is comprised of international experts – particularly in the field of oncology research – from outside Institut Curie. It provides strategic guidance on the institute’s general focus and agenda.

Chairman of the Scientific Advisory Board: Prof. Edith Heard

Find out more about the Scientific Advisory Board

Find out more about the Research Center

With its high-tech equipment, the Hospital Group treats all types of cancer, including the rarest. It is a leader in the treatment of breast cancer, ophthalmological cancer, sarcoma and pediatric cancer. The director of the Hospital Group is elected every 5 years by the Executive Board.

He is supported by a board comprising the site directors respectively for Paris, Prof. Nathalie Cassoux, for Saint-Cloud, Prof. Roman Rouzier and for Orsay, Prof. Rémi Dendale, and the director of Nursing Care, Sylvie Arnaud.

Find out more about the Hospital Group

The Head Office assists the Hospital Group and the Research Center, supporting the activities of Institut Curie and the implementation of our institutional project, MC21. As such it helps us to achieve consistency within the foundation.

► The Head Office is headed by Jacques Gilain.

► The deputy director of the Head Office, Yohan Philippe, supervises

► The deputy director of the Head Office, Amaury Martin, supervises

In the face of the Covid-19 pandemic, which brought with it lockdowns - in France and throughout the world - as well as… 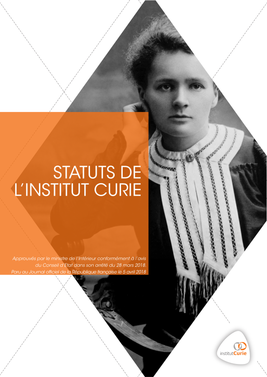