Breast cancer is a tumour which develops from the cells that form the mammary gland. It is known as a heterogeneous disease, because there are several types of tumour. Each tumour calls for a specific treatment.

The treatment of breast cancer depends on the extent of the cancer at the time of diagnosis. It usually includes removal of the tumour (or of the breast, if the cancer has spread) and the nearby lymph nodes. Today, the sentinel lymph-node technique (removing the lymph node closest to the breast) makes it possible to determine during surgery whether or not it is necessary to remove the entire lymph-node chain. Surgery is often complemented by chemotherapy and radiation therapy.

Thanks to the progress made in treatments as well as in screening carried out for women aged 50 to 74 years, the five-year survival rate after diagnosis is around 90%.

>>  Institut Curie offers a seamless care framework, that centralizes all the information you need, avoiding multiple trips to the hospital before treatment begins. When the medical record permits, patients are operated on in the morning and can go home in the evening of the same day.

>> “Alternative” techniques are proving successful. For example, several surgical procedures, including mastectomies (total removal of the breast), have been carried out under hypnosis. This technique allows patients to avoid the complications and fatigue linked to a general anesthetic.

>> Institut Curie is also the leader in terms of post-breast-cancer reconstruction, which must first be handled as a psychological issue. Physical reconstruction is not routinely chosen. Part of the mission of Institut Curie’s actors involves helping patients along their path toward healing. This led to the 2014 production of a documentary, Healing Our Perceptions, which follows patients as they make their various choices.

>> Institut Curie offers a broad range of supportive-care services, including the post-cancer phase, once treatment is complete. The Programme Activ’, in partnership with the charity Siel Bleu and AGR2 La Mondiale, offers appropriate exercise and nutrition workshops to help reduce the risk of recurrence.

Institut Curie is currently participating in more than 20 clinical trials for breast cancer on a variety of topics. 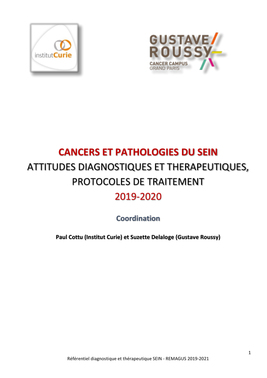 Breast cancer is the most common form of cancer in women and the second most common in the population as a whole, with…