I have long-standing scientific ties with several researchers from Institut Curie, and I am delighted to be joining this wonderful institute

A specialist in cell plasticity processes during the early stages of tumorigenesis, he is the author of more than 150 publications in international journals such as Cancer Cell, Nature, Nature Cell Biology, Nature Genetics and Nature Medicine.

Alain Puisieux is familiar with Institut Curie since, in addition to completing his biology internship at Institut Curie in the late 1980s, he has been a member of the Research Center’s Scientific Commission since 2013. After receiving his doctorate in Boston (Massachusetts General Hospital, Harvard Medical School, USA), he joined the Leon-Berard Center (CLB), a cancer center in Lyon, as a postdoctoral fellow and then as a hospital practitioner biologist. Appointed as a professor of the University in 2000 (University Lyon 1), in Lyon he created the Inserm 590 Oncogenesis and Tumor Progression Unit, and the Cancer Research Center in Lyon (UMR Inserm 1052 - CNRS 5286 - UCBL - CLB), now composed of 26 research teams and 500 members, which he led from 2011 to 2019.

His project is centered around four major goals:

Institut Curie is excited to welcome him this fall; his experience as head of a research center affiliated with a cancer center, his knowledge of the organization of academic research in France, and his own scientific expertise which is very consistent with the Research Center's own research areas, will be major assets as he takes up the position. The Executive Board, with the Ministry of Research’s assent and following approval from the Supervisory Board, the International Scientific Advisory Board of the institute and the Scientific Commission of the Research Center, appointed him Director of Research for a five-year term, renewable once, from September 1, 2019. As a reminder, in accordance with the institute's statutes, a selection committee chaired by Prof. Alain Fischer, a member of the Scientific Advisory Board, was set up in August 2018 to choose Geneviève Almouzni’s successor. 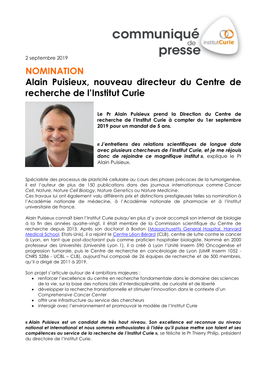