Commissioning six composers to write a piece based on a scientific discovery is the original project of Judith Miné-Hattab, a CNRS researcher at the Institut Curie. Each composer has written a work, from solo to septet, that reflects the beauty of a recent scientific discovery in astrophysics, biology and biophysics.

This concert is the result of a collaboration between these composers and researchers from the Institut Curie (Paris), the Institut d'Astrophysique Spatiale (Orsay), and the Massachusetts Institute of Technology (Boston).

The project is supported by the University of Paris Sciences et Lettres and the Institut Curie.

When music and science meet

Music and science have often been linked in the history of music. Until the middle of the 20th century, most of the music inspired by science was related to physics and mathematics. With the considerable progress made in biology, especially since the discovery of the structure of DNA, biology has also begun to serve as a source of musical inspiration. Some scientific concepts or measures have sometimes been converted directly into music, in other cases a scientific discovery has simply animated the imagination of composers.

The Muse-IC project aims to give composers this opportunity by commissioning a work inspired by a recent scientific discovery. Six composers have been selected to compose a ten-minute work, which may include up to eight musicians: piano, string quartet, clarinet, harp, percussion. Following a call to scientists motivated by the idea of interacting with composers, the composers chose the scientific theme that inspired them the most among fifteen recent findings, pre-selected by Judith Miné-Hattab. During their creative processes, composers interacted with the implicated researchers in order to gain an in-depth understanding of their subject and enrich their pieces.

The outcome of the project is a concert that combines the popularization of science and the promotion of contemporary music. This concert will promote encounters between musicians, scientists and the general public and will raise awareness of the importance of basic science in our society among a non-scientific audience.

The pieces will be performed by musicians of the Orchestre Philharmonique de Radio France and the Orchestre Nationale de France who are all pursuing brilliant careers in chamber music.

Genesis of the project

Judith Miné-Hattab, a biophysicist at the Institut Curie/CNRS, is also a musician. After studying piano at the Ecole Normale de Musique de Paris, she obtained her master's degree in physics at the University of Paris XI and her PhD thesis at the Institut Curie in Paris while continuing to practice chamber music, particularly duets with violinists. She was a post-doctoral fellow at Columbia University in New York (USA) between 2008 and 2012, and, between 2008 and 2010, she participated in the evening music classes at the Juillard school of New York. She continued her postdoc at the Ecole Normale Supérieure of Paris until 2013. Since 2013, she has been a researcher at the CNRS and the Institut Curie, in the team of Angela Taddei (UMR3664, Nuclear Dynamics).

In order to naturally bring together her two passions, she initiated this project and obtained funding within the framework of the interdisciplinary call for projects "Aux Frontières des Labex" launched by the University Paris Sciences et Lettres in 2015.

subject: The first vibrations of the universe and the quest for the first galaxy clusters

subject: The crucial hours that shape you

subject: When our cells sleep: Quiescence and Renaissance

subject: The first vibrations of the universe and the quest for the first galaxy clusters

Team of the project

We would like to thank the "Université Paris Sciences et Lettres", the Deep Labex, the Leonid Mirny Laboratory for their financial support, as well as Angela Taddei for her support all along the project. We thank the "Conservatoire National Supérieur de Musique de Paris" for their advices.

The crucial hours that shape you

When our cells sleep: quiescence and renaissance

Inspired by the research of Angela Taddei team, Compartmentalization and dynamics of nuclear functions at Institut…

Inspiration from Judith Miné-Hattab's research at the Columbia University Medical Center, New York, USA, and at the…

Composers of the Muse-IC project

Six internationally renowned composers embarked on the adventure: for 10 months, they exchanged with a researcher to… 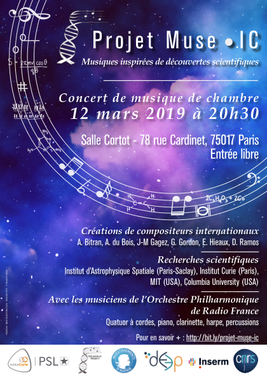