Close to 1,850 volunteer staff from Institut Curie, representing an active population from the Paris region, took part in Curie-O-SA; a serological study launched last May in collaboration with Institut Pasteur. With a SARS-CoV-2 virus infection rate between 11% (serology only) and 16.6% (taking into account loss of taste and smell without antibodies), these results reveal a high prevalence of somewhat short-lived serological immune responses. Among those people positive for antibodies, 21% were asymptomatic. Furthermore, in 5% of cases, infection proven by an RT-PCR test did not lead to the production of antibodies. Featured in the January 2021 issue of the European Journal of Immunology, this study has been extended for one year.

Although the Covid-19 pandemic reached its first peak in March/April 2020 in France, the prevalence of infection, the duration of the response and the protection that it offers are nonetheless not well documented.

An original study conducted among 1,847 volunteers from Institut Curie in the Paris region

Last May, funded by the Fondation de France and institutional funds, Institut Curie launched a serological study - Curie-O-SA - among all of its staff (hospital and non-hospital), in collaboration with Institut Pasteur. Its aim is to monitor the spread of the SARS-CoV-2 virus and to understand the evolution of seroprevalence in a population representative of active adults in good health living in the Paris region after the first wave of the epidemic.

“More than half of Institut Curie staff responded to this appeal.It is this collective commitment that makes the strength and originality of our study conducted jointly with Institut Pasteur. Thanks to the size of our cohort, the sensitivity and effectiveness of our methods and the continuation of our analyses in October and November, our study allows us to obtain reliable and exhaustive results”, explains Dr. Olivier Lantz, clinical immunologist at Institut Curie and coordinator of the Curie-O-SA study.

A total of 1,847 people working on one of Institut Curie’s three Paris region sites (Paris, Saint-Cloud, Orsay) volunteered to take part. All of those included in the study gave blood samples and completed a questionnaire on their symptoms, which allowed precise correlation between immune response and symptoms.

“In the Institut Curie teams and in collaboration with the Pasteur - Theravectys shared laboratory, we developed sensitive very high-throughput LuLISA and PNT[1] methods to quantify the response in antibodies, and its neutralizing activity in people infected with SARS-CoV-2” explains Thierry Rose, researcher in the Cellular Biology of Lymphocytes unit at Institut Pasteur.

The prevalence of the SARS-CoV-2 infection is under-estimated

Drawn between May and July 2020, 11% of the 1,847 serum samples analyzed contained SARS-CoV-2 antibodies. Among positive individuals, 21% were asymptomatic. In addition, in 5% of the participants in whom infection was proven by RT-PCR tests, the analyses showed no antibodies (IgG type).

Among all participants, loss of smell and loss of taste appeared in 52% of individuals positive for antibodies (IgG) and in 3% of negative individuals. However, if we consider the people who lost their sense of taste and smell, 30% of them were negative (no antibodies in their serum), while at the peak of the epidemic they had presented with other symptoms related to SARS-CoV-2 infection. This result suggests that the actual prevalence of infection may have reached 16.6%.

Furthermore, in serums obtained 4 to 8 weeks after the first sample, the analyses revealed that the half-life (i.e. the time needed for the concentration of antibodies to decrease by 50%) of the neutralizing antibodies was only 4 weeks. During retrospective studies, this could lead to under-estimation of the actual prevalence of infection. Nonetheless, the loss of specific circulating antibodies does not necessarily signal the loss of protection. Indeed, seroconversion is accompanied by persistence of specific “memory” T and B cells that prolong immunity in individuals.

To track the evolution of seroprevalence during and after the epidemic’s second wave in October/November, the Curio-O-SA study will be extended for one year. A second sample was taken in 1,000 people included in the study. Moreover, an additional study allowed volunteers from Institut Pasteur to join participants with rhino-pharyngeal swabs taken, on which a combination of infection and immune and inflammatory response markers will be quantified.

[1] LuLISA: Luciferase-linked immunosorbent assay refers to a method for quantifying biomolecules, in this case specific IgG in the serum of tested individuals, by bioluminescence of a deep-sea shrimp luciferase.PNT: Pseudo-Neutralization Test refers to a method for quantifying the neutralization capacity of antibodies on the penetration of CoV2 pseudo-viruses in their target cells. 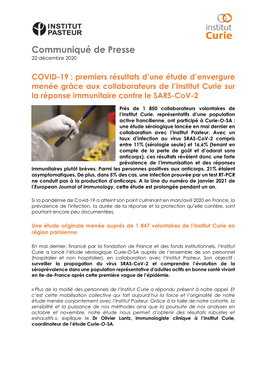 With the introduction of Covid certificates in all hospital facilities, find all the information on your visit to…