What are soft tissue sarcomas?

In fact, there is not one but MANY types of soft tissue sarcoma. This tumour develops in the non-bony support tissues or the wall of the abdominal organs. It presents multiple facets at molecular, histological, clinical and prognostical level: in total, there are some 50 sub-types of sarcomas.

These are relatively rare cancers: they represent around 1% of all cancers in France, i.e. 4,000 to 5,000 patients per year. Some 55% of sarcomas are situated in the limbs, 45% in the deep regions of the trunk and abdomen and 5% in the head and neck.

The speed of progression of these tumours depends on their grade: rapid if it is high, but very slow if the grade is low. Sometimes 10 or more years elapse before they are discovered or become symptomatic. They are also characterised by large volumes, with diameters that sometimes reach several dozen centimetres when they are situated in the abdomen. Contrary to received wisdom, size is not a prognostic factor.

The symptoms are not always very explicit. When the tumour is situated in the abdomen, the symptoms are linked to the compression it causes: coughing, increased abdominal girth, vague pains and so on. In the limbs, they are often characterised by a painless mass, which may lead to delays in diagnosis or sometimes to errors (diagnosis of a hematoma, benign tumour or the like).

The diagnosis is based on imaging tests (MRI for tumours of the limbs and scans for the abdominal area) and on biopsies. Since these tumours are relatively little-known, the diagnosis may be difficult: when in doubt, it is recommended that the patient go to expert centre such as Institut Curie in order to make a diagnosis and propose suitable treatment.

The treatment of primary sarcomas chiefly involves surgical ablation of the tumour. This surgery is highly specific, and many international studies have shown that the surgeon’s experience is fundamental. Depending on the nature, stage and location of the tumour, the surgery may be complemented by radiotherapy (sarcomas of the limbs) and/or chemotherapy.

With optimal treatment, 75% of patients are still alive five years after diagnosis. But it is crucial to first consult a specialist in sarcomas: if the surgery is performed badly, it becomes very difficult to fix the situation, and the chances of survival without recurrence diminish drastically.

Institut Curie is recognised as an expert centre for treatment of sarcomas by the Institut national du cancer (INCA). It is THE centre of expertise for sarcomas in Paris.

The team in charge of sarcomas includes a specialist who has performed sarcoma surgery for more than 20 years. Dr Bonvalot has instigated major improvements in surgical treatments of demoid sarcomas and tumours in the past 20 years. She has personally operated on more than 3,000 patients with this disease during her career. Each week, some six patients are operated on for a sarcoma at Institut Curie. She is also the coordinator of two international trials evaluating therapeutic innovations in local treatment (one concerning retro-peritoneal sarcomas and the other hafnium nanoparticles in sarcomas of the limb or walls).

Dr Piperno-Neumann, a medical oncologist, is responsible for the medical treatment when it is necessary, in particular in cases of recurrence or when metastases occur. Dr Lae offers her expertise as a specialist anatomopathologist, after having spent several years in laboratories specialising in sarcomas in the United States. Dr Valérie Laurence is particularly involved with teenagers. Dr Helfre and Dr Alapetite are the two radiotherapist oncologists who decide on the need for additional radiotherapy.

A team of interventional radiologists performs the imaging tests and confirms the indications of the biopsy. They participate actively in the multidisciplinary consultation meetings (RCP) during which treatments are decided upon. These meetings take place weekly, and analyse the situation of some 20 patients per week.

Institut Curie is anchored in research, both fundamental and clinical: around 15% of patients are included, with their agreement, in clinical trials, which enable them to benefit from the most cutting-edge treatments.

A trial in which European countries, Canada and the United States are participating is coordinated by Dr Bonvalot. It aims to determine the impact of hafnium nanoparticles on the radiotherapy carried out before an operation on a sarcoma of the limb or the walls. The aim is to improve the response to treatment and hence local control of the disease.

Another trial, also international and coordinated by Dr Bonvalot, aims to determine the benefit of pre-operative radiotherapy for retro-peritoneal sarcomas. The aim is also to improve control of the disease. Almost 170 European and Canadian patients have already participated in this study, the interim analyses of which are favourable.

Sarcomas are a large and diverse family of rare and complex tumors. They affect men and women of all ages and usually… 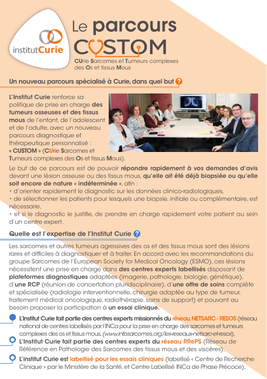 Institut Curie is France’s leading treatment center for retroperitoneal sarcomas, and the third biggest in the world…

The Benefits of Receiving Sarcoma Treatment at a Reference Center